Well, Barack Obama has made his VP selection, taking Washington's most vicious attack dog, Sen. Joe Biden of Delaware. So, the question has now become how to combat the fast-talking Biden and his decades of foreign policy experience. Unfortunately, most of the Republican punditry is running scared from Biden and, in my opinion, suggesting that McCain adopt a disastrous strategy with his own pick. So, here are my thoughts on how to beat Biden, and they are probably different from what you've been hearing on the news:

Biden is a fast-talker who pulls no punches. He has an encyclopedic knowledge of foreign policy, and will try to bludgeon any debate opponent with all of the minutia of different situations. He is also a hothead who is overly fond of personal attacks. The best way to beat him is to make him look like a mean-spirited jerk (which is not hard), but unfortunately the punditry seems to think that McCain should now be forced to pick an aggressive VP who can crawl into Biden's gutter and beat him at his own game. I think that that's a horrible idea, and I'm not just saying that because I'm promoting Palin.

Biden is without doubt the best attack dog in the country, period. We aren't going to find someone who can beat him on that front. Furthermore, sinking to Biden's level would make the ticket look sleazy. Instead, we should note that Biden totally undermines Obama's "change" mantra, which McCain can now seize for himself by taking a reform minded VP from outside Washington. We can also show up Biden in the debates by selecting a calm, collected candidate who will show Biden for the hothead he is. Sarah Palin fits both bills.

For one, Palin has actually produced the sort of change that Obama and Biden can only talk about. Secondly, she will refuse to play in Biden's mudpit, which makes him look even worse. Third, she knows how to debate hotheaded opponents. Biden compares very well to John Binkley, another fast-talking attack dog who ran against Palin in the 2006 primary. Palin filleted Binkley (and incumbent Gov. Frank Murkowski) by sitting back while they ranted and then delivering crushing one liners that made them look like bratty kids ("Alaskans deserve better than this."). Finally, Biden will do everything he can to attack his opponent on personal terms, which is very dangerous when you are running against a woman or a military parent. Biden WILL say something stupid in the debates, probably belittling Sarah for having been a housewife or mentioning that Track Palin is in the Army, and Gov. Palin will be ready with with a "you're no Jack Kennedy"-style response.

Biden must not be allowed to interrupt the McCain game plan, which likely calls for a young, reformist VP. And when it comes to the debates, the secret will be to allow a cooler head to prevail over the fire-breathing Joe Biden. Gov. Palin is that cool head, and a reformer to boot. If she plays the debate right, she could reduce Biden from "distinguished senator" to "schoolyard bully" and nullify any gravitas that he brings to the Obama ticket.

Sounds good, I am not as familiar with her. Who else would he choose?

I think Palin would be perfect.

I don't think it's gonna be Romney. Not with the way McCain is attcking obama with the ads of Biden in the debates talking shit about Obama. Romney was critical in the debates of McCain, so I don't think they can choose him. The other person would be Pawlenty from Minn.


Any relation to Jesus?

I like her a lot...
Systems + Discipline + Time = Free Money

She is nice looking too.

I agree that a woman would be a very good choice. Either that or a colored guy.

I think you're right, she would be a good choice. As an Obama supporter, I am praying to the mormon god that McCain picks Romney.

D2bets said:
I think you're right, she would be a good choice. As an Obama supporter, I am praying to the mormon god that McCain picks Romney.

I'm not that big on Romney. I think if he picks Romney, then the campaign wil be nothing but negative attacks and won't focus on the issues. I think if Palin is selected, no way will they be able to attack her, and if they do, they will pay for it in votes.

Wow...thanks to tocco05 now we know she has healthy gums too.

VPs don't make tickets, but they can hurt them.

The best candidate is the one who doesn't harm the drive to the White House.

So let's break it down. Which of the following candidates would bleed votes:

A woman could pick so many of the Clinton supporters 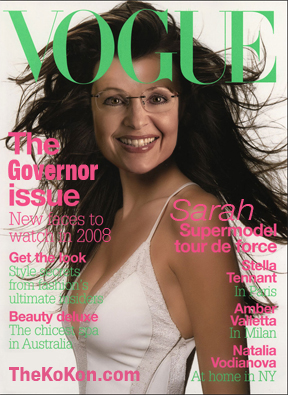 
Alaska's Sarah Palin is a bold, first-term Republican governor, a former beauty pageant winner, a mother of five and, if a website of mysterious origin proves prophetic, she could be Sen. John McCain's choice for vice presidential running mate.

Scouring the Internet for possible presidential and VP combinations, most websites – such as McCainRomney.com, McCainHuckabee.com or McCainJindal.com – turn up as domain names for sale or general information sites.

Despite a report by Washington D.C.'s Roll Call last week that Palin had submitted paperwork to the Republican national office, her press secretary, Bill McAllister, told WND that McCain has given no indication of choosing her as his running mate.

"The governor will play some kind of unspecified role in the convention," McAllister said, "but the only contact with the McCain campaign has been a request for her to participate in a national conference call on energy issues. There has been no outreach or vetting regarding the vice presidency."

Palin has drawn attention as a potential running mate because of appeal to the Republican base. She has personally demonstrated pro-life beliefs and a willingness to tackle tough issues, including an incident in which she took on Republican leadership in her state for ethics violations.

"Her rise is a great (and rare) story of how adherence to principle – especially to transparency and accountability in government – can produce political success," Barnes wrote.

Who then, created the McCainPalin.com website and asked readers to "stay tuned" for an announcement?

Several websites and blogs are promoting Palin for the GOP ticket, including Draft Sarah Palin for Vice President, PalinforVP.com and My McCain Blog, which created the campaign sign pictured above. Palin's press secretary acknowledged to WND that these sites have been in existence for several months and are consolidating their resources to rally Palin supporters.

Supporters and bloggers that WND was able to contact, however, denied any knowledge of who created McCainPalin.com.

Adam Brickley, founder of Draft Sarah Palin for Vice President, told WND he thought it was created by a supporter, but he really didn't know.

"It has been up for a while and used to be a fully functional webpage with newsfeeds, bios, etc. However, the 'stay tuned' message is new," he said. "I really have no idea who runs it."